Born in England in 1945, Mike Roberts moved to Canada in 1974. His early musical "training" consisted of some formal music education during high school but mainly of playing trumpet in jazz bands during his teens and university days. Over the more than 50 years since then, he had sucessful careers in teaching, banking and most recently computer technology. He left the corporate world in 1999 to work full-time as a composer.

Mike's musical work celebrates many of life's emotions, moods and special moments, writing as he does in a variety of different genres (classical, jazz, and occasionally rock....) and with a variety of different audiences in mind (film and video, ballet, the concert hall....). Above all, he believes that music should be fun both for the composer and the listener! 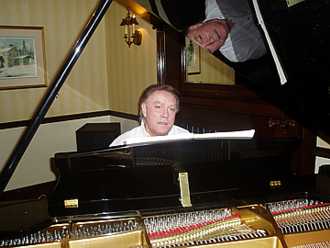 His classical output includes two symphonies; concertos for clarinet, guitar, trumpet and piano; a full length ballet ("Romeo and Juliet"); a series of solo piano pieces ("Caprice"); a quartet for violin and woodwinds; and a number of short concert pieces such as the "Concertino" for trumpet and the "Remembrance" suite.

His technology background has been very beneficial to this stage of his career in music. "After 30 years away from the music business - and limited formal training - I have a lot of catching up to do," he explains. "Technology speeds things up, helps me get my music out there." What this means in practice is that Mike scores, performs and produces all his recordings from his studio.

Mike lives with his wife in the heart of Canada's Niagara wine region, where until 2003 they also owned and operated one of the country's premier fine dining restaurants. Mike wrote the original music featured in the restaurant